Yes, UFOs Are A Thing

So, in case you haven't caught on to the obvious yet, UFOs are a thing.

And by UFOs what I mean is: highly advanced intelligent alien life and spacecraft, not just some vague "unknown" activity in the sky. Not only that, but all the evidence points to the US and Russian governments actually being in possession of alien spacecraft and trying desperately to reverse engineer them.

Obviously don't believe everything you hear, but UFOs are no quackery nor a hoax. The evidence is simply overwhelming and beyond anyone's ability to debunk. With that said, there's still much we don't know. So this field is rife with potential for epistemic delusion, so be careful.

Here are some good resources for educating yourself about the phenomena:

It really does seem that we are alive at just the perfect time for mainstream disclosure. It's already happening and exciting new developments should be coming in the news over your lifetime. So stay vigilant. Keep your mind open, but also don't be foolish.

If you're going to study UFOs, be careful about your epistemology and jumping to conclusions. There are many self-deceived conspiracy theorists within this field, so be extra careful not to get caught up in wild speculation and especially any kind of fear-mongering narratives about UFOs. The fact is they are flying around but we just don't have a good understanding of what they want and what our governments are doing about it. There are many unknowns in this field so be careful not to speculate. Do not get carried away with this topic.

When you go beyond every teaching and teacher:

What Is Daoism?
Telekinesis

You should know that both the US and Russian intelligence agencies run secret paranormal programs to use remote viewing and other psychic phenomena to do spying and intelligence gathering work.

So while the materialist scientists and public intellectuals act stupid, the CIA and FSB are using psychic phenomena in the field to accomplish real-world results. See, the thing is, you don't have to know how to explain mystical phenomena scientifically in order to use it to advance your survival. Unlike the scientific community, the CIA doesn't care about metaphysical explanations, they just care whether they can use it to gain a strategic advantage. If the CIA can use remote viewing to track the construction of a top secret new class of Russian nuclear submarine, that's good enough for them. And the CIA has successfully used remote viewing to uncover top secret Russian nuclear submarines before the Russians even finished constructing them.

And how is all this possible? Simple. Because the entire Universe is mental.

Update: Some have accused me of spreading conspiracy theories with my claims above about the CIA. But of course it is no conspiracy theory that the CIA studies and uses psychic phenomena. This is well-documented. Project Star Gate is but one example. It is not a conspiracy theory that intelligence agencies use whatever means available to further their spying. That's the core function of an intelligence agency. They also use psychedelics and deliriants like scopolamine as a truth serum. It's safe to assume that if a thing works, they will use it.

Banned TED Talk About ESP Research For US Intelligence Agencies

In the ultimate sense you're God, of course.

It is God's avatar.

Avatar is a profound word that you should contemplate and incorporate in your existential lexicon.

What is an avatar?

For that you should read this Wikipedia entry on Avatars.

The essence of the definition is this: "the material appearance or incarnation of a deity on earth."

That's precisely what you are.

See, God being an Infinite Shapeshifter — God being Nothing — you cannot have any form other than that of some finite avatar.

"The Rigveda describes Indra as endowed with a mysterious power of assuming any form at will."

"Avatar literally means 'descent, alight, to make one's appearance', and refers to the embodiment of the essence of a superhuman being or a deity in another form."

"In Hindu traditions, the 'crossing or coming down' is symbolism... of the divine descent from 'eternity into the temporal realm, from unconditioned to the conditioned, from infinitude to finitude'. An avatar... is a saguna (with form, attributes) embodiment of the nirguna Brahman. Avatar... actually means 'Divine Descent'."

Every living creature is a finite avatar of God.

But what does God's face look like when it is not wearing a mask (avatar)? INFINITY!

It's an infinite singularity of pure consciousness. Don't you see? The Godhead is so unbiased it cannot allow itself to have any form, and therefore it must incarnate as all possible forms. God's truest face is the superposition of every possible avatar.

Most people simply don't know about the basics of what mysticism is:

If you slit the throats of every human on the planet with your own hand, God's love for you would not diminish in the slightest. People are surprised by this. But can't you see that this is the highest love? This is the real test of one's love. If I can shake your love by slitting someone's throat, then look how fragile your love is! Look how limited! If God's love could be diminished in the slightest, that would mean that a higher love was possible, but if a higher love was possible then why would God not become that higher love until nothing higher was possible? Therefore God's love is Absolute. It is unshakable. There is nothing you can do to shake God's Love at all because the Absolute Truth is that there is no difference between anything, and God is perfectly conscious of this.

So do not worry about sin, because sin does not exist. Sin is nothing more than bias within a finite mind. Become so unbiased that you realize that evil never existed. This is the highest Truth. Do not let egos or society gaslight you with their fragile, limited, and fear-based definitions of love. Do not settle for anything less than Absolute Love. No exceptions!

This is not a license to be an asshole or a criminal.

Theories Of Everything - Part 2
Denying The Fact-Checkers

The epistemic madness train rolls on:

See, the fundamental mistake here is assuming that fact-checkers are supposed to call out "both sides" equally. But this shouldn't be the case at all if one side is lying more than the other. The problem is that when you're on the side which lies way more, you must lie to yourself that your side lies way more. And the best way to do that is to blame the fact-checkers for being biased. This is bias projection 101: when you are blatantly biased, just blame the other person for being biased while pretending like you aren't.

Notice how easily the mind deceives itself in this way.

Whenever you feel a knee-jerk impulse to call someone else biased, stop and ask yourself, "Could it be that this is actually my bias?" This is one of the things that distinguishes a fool from the wise. Characteristically, a fool is blind to his own biases.

Are You A Psychopath?

Take this free online 5 minute test to determine how much of a psychopath you are: Click Here To Start

Here is my result: 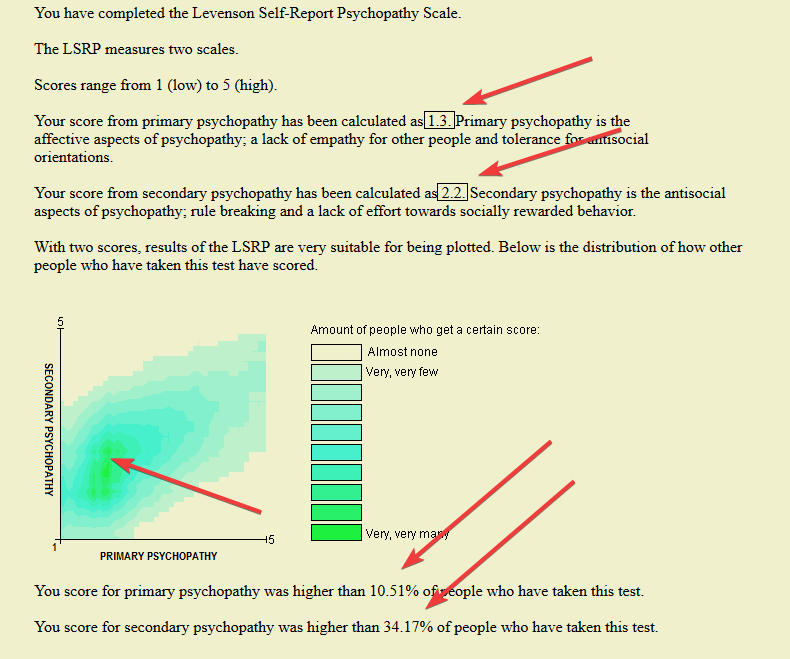 You can find other fascinating psychological tests at OpenPsychometrics.org