What It Means To Love Someone

Humans often say "I love you" but we usually have no clue what that truly means. One day it will shock you to realize that you've never truly loved anyone in your life because you didn't even know what love was. Instead, what you called "love" was just the projections of your own needy ego.

Here's a powerful description of what "I love you" means from the wise Daniel Schmachtenberger.

Notice the relationship between that kind of love and selflessness. How can you love someone like that while still having an ego self? Can you see why such love is so rare and difficult to embody?

After you read that, also keep in mind the love he describes is still not Absolute Love. He's talking about love as manifested among conscious beings towards one another, but Absolute Love is something far more radical still. Be careful not to confuse your loving attitude or actions towards another with Absolute Love. Absolute Love is independent of your attitude, actions, or level of embodiment.

A very good and important discussion of how YouTube algorithms feed into the poisoning of our collective sense-making ecosystem:

What is not well understood is the collective epistemic cost of creating content that ideologically polarizes and radicalizes the citizenry all in the name of success, clicks, and profits. This is a big part of how The Social Matrix works and keeps society from advancing to higher stages of cognitive, spiritual, and political development. Radicalizing people with ignorance and massive bias has become a huge business in our society, which is one of the biggest obstacles to our collective development. Not only is our education system profoundly inadequate, then once people get out of school their primary source of education about the world becomes some idiot like Tim Pool, who reinforces their per-existing biases, judgments, fears, and hatreds. And it's all meant to appear as if one is getting well-informed and engaged. Half the population's mind is simply being slow-poisoned over years of listening to guys like Tim Pool. Meanwhile, Tim Pool rakes in tens of millions in cash. And of course Tim Pool is not conscious enough to understand what he is doing and how much it is damaging society. This is what happens when you confuse success with truth.

One of the points I keep harping on is that the mind has an infinite capacity for denial of reality.

Most people don't appreciate just how deep this goes.

So here's a perfect example of how this principle can get manifest in real life:

Make no mistake, this isn't just some crazy people who do this. Your mind does this too. The mind is fundamentally self-deceptive and never to be trusted. This is the #1 rule of any kind of inquiry into reality. And this is where most people fuck up. They just don't take self-deception seriously enough.

This is what happens when you are a wage slave:

Future generations will scratch their heads in puzzlement at stage Orange capitalism.

Some gossip, but beautiful gossip it is:

There is Japanese sect of Shinto called Konkokyo. "Kami" is the Japanese word for God.

You can read about the Konkokyo's metaphysics and descriptions of Kami on this Wikipedia page.

You will see many similarities to what I teach about Kami. For example:

"God is named 'Tenchi Kane no Kami-Sama' which can mean 'Golden spirit of the universe.' Kami is seen as infinitely loving and powerful.

Kami is omnipresent and is essentially the energy of the workings of nature and the universe that gives all things a conscious mind. This is also the reason the physical universe is referred to as 'Kami's body'. Kami is often seen as a divine ideal parent — offering love, affection, support, protection, and nurturing us through his blessings. It is taught that Kami loves all people of the world no matter their race, religion, gender, and so on. Although mentioned as 'He' in materials for linguistic convenience, Kami is neither male or female."

Why is it that some dude on YouTube in the 21st century teaches the same basic stuff that was taught by some obscure sect hundreds of years ago in Japan?

Is this just an accident?

Find out for yourself.

How To Turn Products Into Companies

If you're starting any kind of biz, this is must-known advice:

Political Asymmetry Proven In One Image

I have long claimed that the left and right wing are not equally conscious, truthful, loving, or developed. Many take offense to this claim, accusing me of bias. Well, here's the proof in one image: 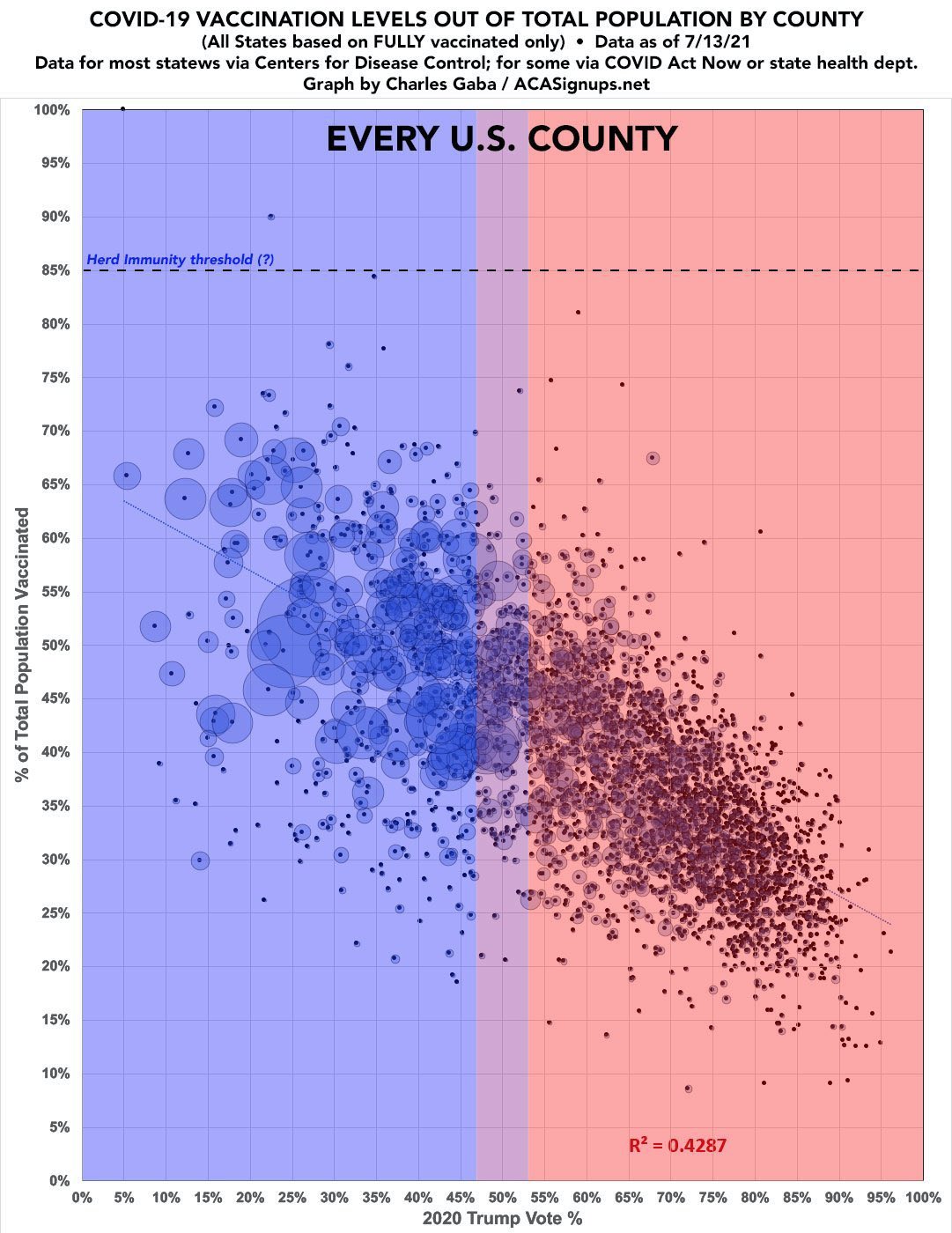 This chart shows the vaccination rate of every county in the US vs the percentage of them who voted right-wing (for Trump). Roughly speaking, the typical vaccination rate in right-wing counties is about 37% whereas the typical rate in left-wing counties is about 53%. The stronger a county voted for Trump, the less vaccinated it is. The other important fact you need to know is that 99% of people now dying from Covid-19 are unvaccinated.

So what this chart shows is the real-world consequences of an underdeveloped epistemic framework. You see, it turns out that one's worldview, one's beliefs, one's paradigm has serious survival consequences. Those with bad epistemologies get weeded out by natural selection. I'm not saying this to gloat. This is tragic and embarrassing. But this is the consequence of the mind-cancer that has been promoted in right-wing circles and media over the last 4 years. The constant conspiracy theories, denial of basic and obvious science, grifting off culture war issues, "socialism" hysteria, and just overall reactionary attitudes against stage Green has led to what you see in the picture above. It's in vogue these days to hate on mainstream media. But actually it is non-mainstream conspiratorial fringe media which is killing people through sheer stupidity. This is also clear evidence of the costs of abusing skepticism (false vs true skepticism). The human mind can easily be poisoned with false skepticism.

In the long run it matters how accurate and truthful your worldview is. You cannot just bullshit your way through life without paying some consequences. The more selfish you are, the less truthful your worldview will be, the more negative karma it will produce for you and your community. Which is why we at Actualized.org focus so much on epistemic issues and truth. This stuff is not "just philosophy". Millions of lives are at stake. The economy is also at stake (in case you are so selfish as to only care about the young and healthy).

Sorry, but there is empirical proof that left-wingers have higher cognitive development than right-wingers. Which of course is not to say that left-wingers are immune to delusion and group-think — they are not. But on average, right wingers have less truthful, more selfish worldviews. Remember, selfishness = falsehood. Selflessness = truthfulness. Why must this be so? Because the finite self is an illusion. So anyone who clings to the finite self too much will pay a price.

This also shows the important connection between truth, consciousness, development, epistemology, and politics. Sometimes people criticize me of being too political. Why talk about politics at all? Because if we don't work to bring truth, consciousness, psychological development, and epistemology into politics, our politics will remain a domain of darkness, corruption, and devilry. If you are sickened by the selfishness of politics you should be eager to light a candle within that place of darkness, otherwise who else will shine the light? And if you don't like conscious people taking some time out of their work to light a candle, then what right do you have to complain about the sorry state of our political situation?

Stop complaining about the darkness, start lighting candles. A candle is something which helps people see reality more truthfully. The best thing you can do for the world is to become a candle. And the more light we can create the less devils will flourish in our midst, for devils can only thrive in the shadows.