The Magic Of Consciousness

It can be easier to recognize what consciousness is when it changes rapidly and fluidly right before your eyes. Can you see that the image below is pure consciousness? Look at what consciousness can do! Try staring at it as though you were meditating on it. Become aware that it is you. This is NOT pixels on a screen! This is CONSCIOUSNESS!

Marvel at your own beauty.

The Dunning-Kruger Effect explains why, when people are ignorant, they tend to be aggressively ignorant.

Basically, the more of a fool you are, the less capacity you have to recognize that you are being a fool. Have you noticed? — when dealing with a fool, how difficult it can be to convince him that he's a fool? That's precisely what makes him a fool!

Arrogance & intransigence are the hallmark of fools.

Humility is the hallmark of sages.

Shugendo is a 7th century Japanese form of spirituality:

Shugendo was banned by the Japanese government in 1872 until the end of WWII, when religious freedom was restored.

This is how self-actualization was done 1000 years ago. And it's still done this way in many places around the world today. 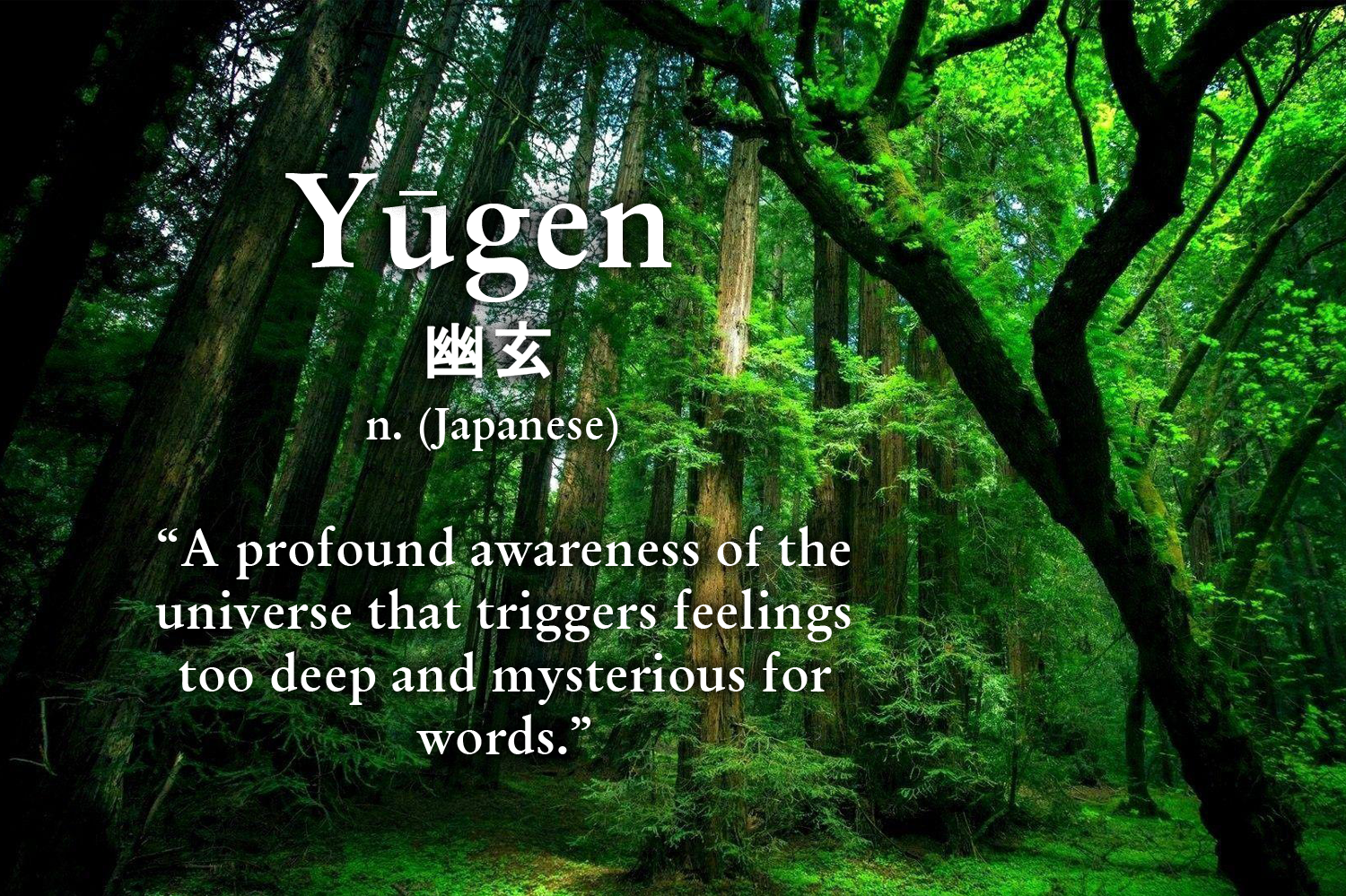 This is what I was talking about in the What Is Spirituality? video where I said that spirituality is "developing a deep metaphysical connection with reality."

Yugen! — that's what you're really looking for.

How I Started My First Business
Hate or Love?

Ethnocentrism means: "I love my family, people, my race, my religion, my country, my culture, my traditions We are the best!" The world is divided into us vs them. What happens to "them" — other peoples, races, nations, religions, countries, cultures — does not matter. They are basically dispensable. They can be hated, excluded, demonized, slandered, raped, killed, tortured, etc. That doesn't matter because "they" are not "us".

One of the astounding features of the ethnocentric mindset is that it lacks the self-awareness to realize that it is ethnocentric. It literally cannot see outside its own perspective. You must understand: just because you have the capacity to look at the world through different perspectives does not mean that everyone else does! Most people do not have this capacity! This capacity is not a given.

Very few people understand the ethnocentric mindset. Those who have developed beyond it cannot understand it because it looks like delusion of the highest order. To whose who are immersed in it, it looks totally natural, normal, and could not be otherwise. So neither side really understands.

I challenge you here not to judge, not to gawk, but to really seek to understand the mindset and worldview of an ethnocentric person. Get inside their mind. Look at the world as they see it.

Remember, about 70-80% of the world population is at ethnocentric stage Blue. It would be wise of you to develop a deep understanding of how they think.

Important Note: Ethnocentrism comes in many degrees. The example above is a fairly heavy degree. Not all stage Blue people are this heavy. Although, many of them are! — just in more socially acceptable ways.

All Understanding Is Metaphoric - Part 2

Correction: In this video I used the example of "Vishnu" when I really meant to say "Ganesha" — the elephant god. It doesn't really matter but I mixed up those two Hindu deities.

Here's a link to Part 1 in case you missed it.

What many non-business people do not realize is just how much corruption, fraud, manipulation, and downright criminality is involved in forging success. Many successful Spiral Dynamics stage Orange people are really just fakes who strong-armed their way to the top through special privilege, backroom deals, and outright theft. Success is not an honest signal because it can be faked so easily. It's much easier to fake being a rich person than to fake being a loving person.

As far as Trump's fraud goes, this is still only the tip of the iceberg. It's a lot worse than anyone's yet disclosed. As predicted by Spiral Dynamics and ego dynamics.

Again, I'm not posting this as a political attack or some liberal talking point. I'm trying to unmask for you just how sneaky and fraudulent the ego is. Because a lot of naive people see a successful-looking ego and aren't able to realize that the success is just a front. It's not merely that Trump is fooling lots of people, first and foremost he is fooling himself. This is not a Trump issue, this is an ego issue. You can think of Trump as a zombified corpse possessed and reanimated by a spirit known as ego. This spirit dictates everything he does, making him very predictable.

It's important to realize that success is mostly a facade. Most celebrities you admire are paper thin. They are not well-developed, conscious human beings. This includes popular self-help authors, business leaders, PUAs, YouTubers, TV pundits, public intellectuals, etc. Even if you manage to become successful, you will still be rotten to the core and hollow inside. Never, ever, mistake success for development, consciousness, or happiness.

In our stage Orange society it can be challenging for people to distinguish between success and development — because most people have done zero deliberate development work. Which is how we ended up with Trump. As you become more developed and conscious of how the ego works, all of this will become totally transparent to you.

The entire stage Orange system of business is built on mass-scale white-collar fraud, exploitation, and manipulation. It's just carefully tucked behind a glamorous facade. This is not some kind of anomaly, this is business as usual. Totally normalized by stage Orange culture.

But you see, the problem with all the ego's lies and deceptions is that the truth always wins out in the end, leading to a tragic comeuppance. This is karma at its finest. Karma will be knocking on Trump's door for years to come.

So what's the solution? Repent devil! Bite the bullet now and align yourself with truth. 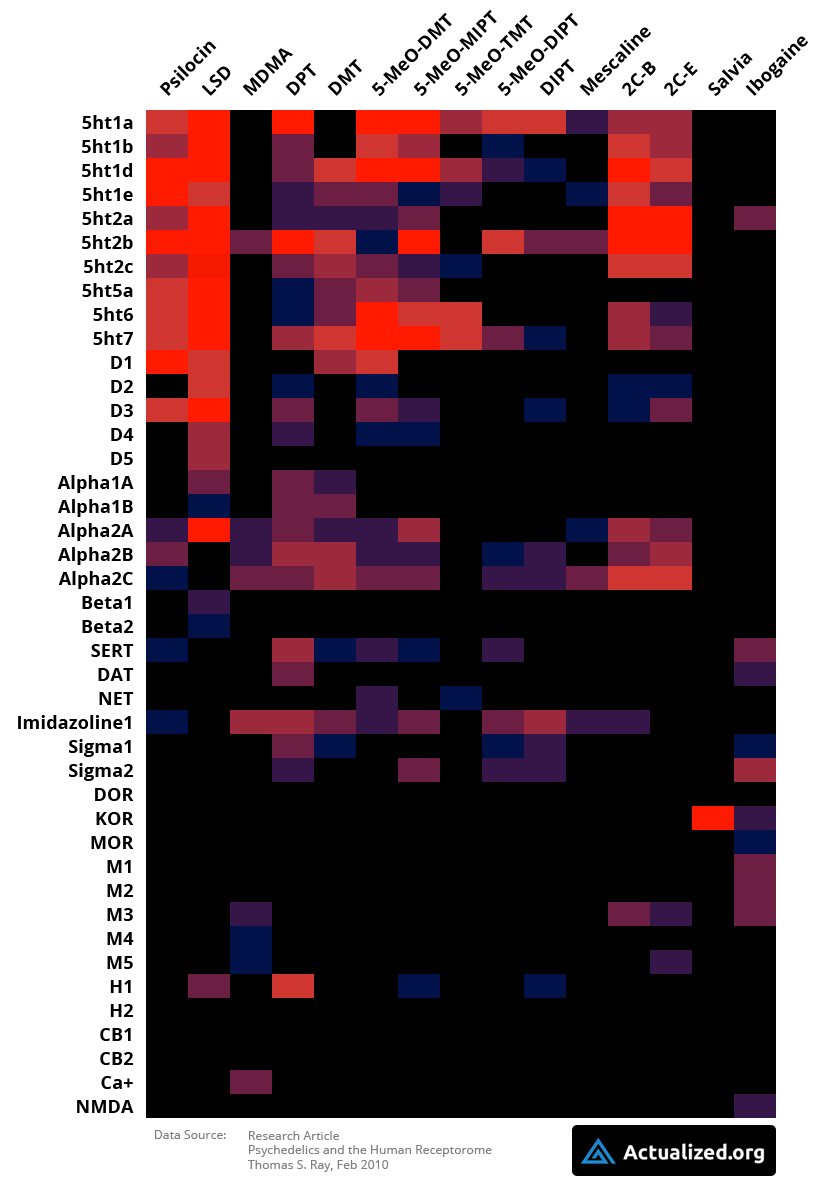 Looking over this data, some interesting observations jump out:

The chart would be even better if I could find some data for 4-AcO-DMT, 4-HO-MET, AL-LAD, DXM, ketamine, bufotinine, and datura.

In the future, with more research, we should have really accurate maps like this for all psychedelic substances. We could even design new psychedelics to uniquely target specific receptor sites.