Inside The Alex Jones Cult

Here's an outstanding interview by David Pakman with the wife of Alex Jones, offering a rare glimpse into the self-delusion and narcissism fueling the Alex Jone phenomenon.

Watch out! The 21st century will see many more cults forming online. The online medium is ripe for exploitation and weaponization by devils proclaiming themselves to be angels. YouTube, Facebook, Google, Twitter, iTunes, Instagram, etc will all be hijacked by devils to some degree, in the same way that TV, radio, and newspapers were. The devil always thrives in newly developing media because they lack legal regulations and ethical norms. The devil thrives in the wild west, which is one of the fundamental flaws of anarchism and libertarianism. In a wild west environment the biggest devils will rule.

Inside The R. Kelly Sex Cult

One of the things I hope you get from watching my videos is just how timely, relevant, and practical all of the stuff we talk about is. Philosophy, epistemology, metaphysics, psychology, and spirituality are not just some wooly academic pursuit, their effects are felt throughout culture every day. You can see it in the news every day if you know what to look for because the principles we discuss on Actualized.org are so fundamental they shape all human action across all geographical locations across all time.

Here's but one example:

This is a good example of a secular cult.

R. Kelly seems to exhibit quite a bit of unhealthy Spiral Dynamics stage Red, which is quite common for rappers and cult leaders.

Should it be any surprise at this point that the Aztecs were nondualists?

Here's a summary of Aztec metaphysics from the Internet Encyclopedia of Philosophy:

"At the heart of Nahua (Meso-American) philosophy stands the thesis that there exists a single, dynamic, vivifying, eternally self-generating and self-regenerating sacred power, energy or force: what the Nahuas called teotl (God). Elizabeth Boone writes, 'The real meaning of teotl is spirit — a concentration of power as a sacred and impersonal force'. According to Jorge Klor de Alva, 'Teotl implies something more than the idea of the divine manifested in the form of a god or gods; instead it signifies the sacred in more general terms'. The multiplicity of gods in official, state sanctioned Aztec religion does not gainsay this claim, for this multiplicity was merely the sacred, merely teotl, 'separated, as it were by the prism of human sight, into its many attributes'.

Teotl continually generates and regenerates as well as permeates, encompasses, and shapes the cosmos as part of its endless process of self-generation and regeneration. That which humans commonly understand as nature — e.g. heavens, earth, rain, humans, trees, rocks, animals, etc. — is generated by teotl, from teotl as one aspect, facet, or moment of its endless process of self-generation-and-regeneration. Yet teotl is more than the unified totality of things; teotl is identical with everything and everything is identical with teotl. Since identical with teotl, the cosmos and its contents ultimately transcend such dichotomies as personal vs. impersonal, animate vs. inanimate, etc. As the single, all-encompassing life force of the universe, teotl vivifies the cosmos and its contents. Lastly, teotl is both metaphysically immanent and transcendent. It is immanent in that it penetrates deeply into every detail of the universe and exists within the myriad of created things; it is transcendent in that it is not exhausted by any single, existing thing.

Nahua metaphysics is processive. Process, movement, becoming and transmutation are essential attributes of teotl. Teotl is properly understood as ever-flowing and ever-changing energy-in-motion — not as a discrete, static entity.

Although essentially processive and devoid of any permanent order, the ceaseless becoming of the cosmos is nevertheless characterized by an overarching balance, rhythm, and regularity: one provided by and constituted by teotl... Dialectical polar monism holds that: (1) the cosmos and its contents are substantively and formally identical with teotl; and (2) teotl presents itself primarily as the ceaseless, cyclical oscillation of polar yet complementary opposites.

Teotl's process presents itself in multiple aspects, preeminent among which is duality. This duality takes the form of the endless opposition of contrary yet mutually interdependent and mutually complementary polarities that divide, alternately dominate, and explain the diversity, movement, and momentary arrangement of the universe. These include: being and not-being, order and disorder, life and death, light and darkness, masculine and feminine, dry and wet, hot and cold, and active and passive. Life and death, for example, are mutually arising, interdependent, and complementary aspects of one and the same process.

The created cosmos consists of the unending, cyclical tug-of-war or dialectical oscillation of these polarities — all of which are the manifold manifestations of teotl. Because of this, the created cosmos is characterized as unstable, transitory, and devoid of any lasting being, order or structure. Yet teotl is nevertheless characterized by enduring pattern or regularity. How is this so? Teotl is the dynamic, sacred energy shaping as well as constituting these endless oscillations; it is the immanent balance of the endless, dialectical alternation of the created universe's interdependent polarities.

Because essentially processive and dynamic, teotl is properly characterized neither by being nor not-being but by becoming. Being and not-being are simply two dialectically interrelated presentations or facets of teotl, and as such inapplicable to teotl itself. Similarly, teotl is properly understood as neither ordered (law-governed) nor disordered (anarchic) but as unordered. Indeed, this point is fully general: life/death, active/passive, male/female, etc. are strictly speaking not predicable of teotl. Teotl captures a tertium quid transcending these dichotomies by being simultaneously neither-alive-nor-dead-yet-both-alive-and-dead, simultaneously neither-orderly-nor-disorderly-yet-both-orderly-and-disorderly, etc.

In the end, teotl is essentially an unstructured and unordered, seamless totality. Differentiation, regularity, order, etc. are simultaneously fictions of human unknowing and artistic-shamanic presentations of teotl. In Western philosophical terminology, one perhaps best characterizes the radical ontological indeterminacy of Nahua metaphysics as an extreme nominalist anti-realism, and teotl, as a Kantian-like noumenon.

Nahuas philosophers also conceived teotl pantheistically: (a) everything that exists constitutes an all-inclusive and interrelated unity; (b) this unity is sacred; (c) everything that exists is substantively identical and hence one with the sacred; (d) the sacred is teotl. There is only one thing, teotl, and all other forms or aspects of reality and existence are identical with teotl; (e) teotl is not a minded being or person.

Teotl is a sacred artist who endlessly fashions and refashions itself into and as the cosmos. The cosmos is teotl's grand, ongoing artistic-cum-metaphorical self-presentation; teotl's ongoing work of performance art or 'metaphor in motion'.

Teotl artistically-cum-shamanically presents and masks itself to humans in a variety of ways: (1) the apparent thingness of existents, i.e. the appearance of static entities such as humans, mountains, trees, insects, etc. This is illusory, since one and all are merely facets of teotl's sacred motion; (2) the apparent multiplicity of existents, i.e. the appearance of discrete, independently existing entities such as individual humans, plants, mountains, etc. This is illusory since there is only one thing: teotl; and (3) the apparent exclusivity, independence, and irreconcilable oppositionality of dualities such as order and disorder, life and death, etc. This is illusory since they are interrelated, complementary facets of teotl.

As an epistemological consequence of teotl's self-disguising, when humans customarily gaze upon the world, what they see is teotl as a human, as a tree, as female, etc. — i.e. teotl self-disguised — rather than teotl as teotl. Wisdom enables humans to discern the sacred presence of teotl in its myriad disguises.

This is one of the most beautiful & complete articulations of nonduality that I've ever come across.

Inside The Moonies Cult

One of the world's most powerful cults is the Unification Church, otherwise known as The Moonies. It was founded by Korean business tycoon, prophet, and convicted felon, Sun Myung Moon.

Here's an eye-opening documentary about it:

*Remember to take Wikipedia pages about major cults with a grain of salt. Cults have no qualms about falsifying their own Wikipedia pages to make themselves look better.

Sometimes you become so conscious of the truth of a matter that you just go silent.

Train yourself to bask in silence, like a cat basking in the rays of the sun.

I love this example of a strange loop by Belgian surrealist artist, Rene Magritte. 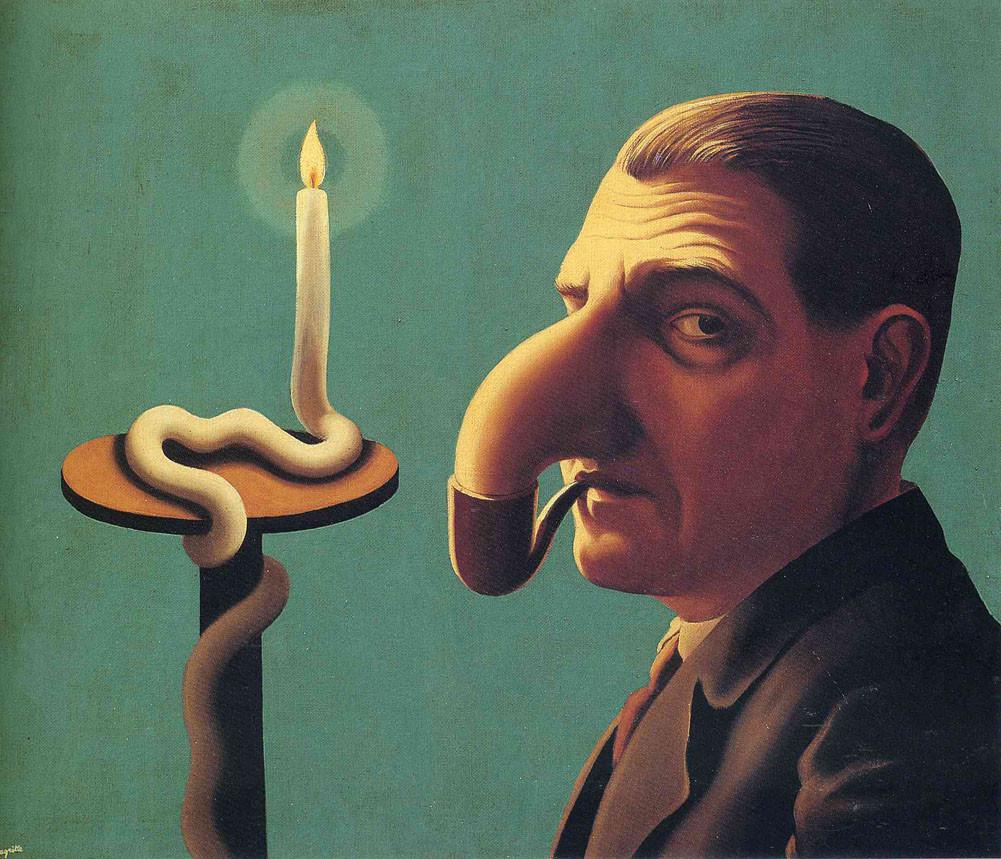 Here's how Wikipedia describes Magritte's style: "He became well known for creating a number of witty and thought-provoking images. Often depicting ordinary objects in an unusual context, his work is known for challenging observers' preconditioned perceptions of reality. Magritte's constant play with reality and illusion has been attributed to the early death of his mother."

René Magritte described his paintings as "visible images which conceal nothing; they evoke mystery and, indeed, when one sees one of my pictures, one asks oneself this simple question, 'What does that mean?'. It does not mean anything, because mystery means nothing either, it is unknowable."

Just like nonduality. God is a strange loop. You try to know yourself, but you cannot.

People sometimes think, "But Leo, how am I going to make a career out of my passion? What if my passion is something weird that cannot earn money?"

What people don't understand is, virtually any passion can be turned into a profitable life purpose and a career. Especially now in a globalized internet economy. Look at how this guy is following his passion:

That could be you — metaphorically ;)

Don't be afraid to be weird. Own your passion, whatever it is. You can be weird as long as you are also strategic and following the principles laid out in my Life Purpose Course.

Life doesn't get much Greener than this:

Pay close attention if watching this video triggers judgment in you. That's the Green value system rubbing up against your Orange & Blue ego.

How deeply have you integrated Green? How comfortable are you with Green? If this kind of value system disturbs you, you're not as developed as you like to think.

Conscious Capitalism, Inc is a non-profit organization started by the founder of Whole Foods, John Mackey, whose mission is to integrate consciousness with business. They take a Spiral Dynamics stage Green/Yellow approach to business.

If you are running a stage Orange business and you do not evolve your business into Green or above in the next 50 years, your business will be crushed by Green/Yellow corporations. So stop chasing max profits and start thinking strategically about how your business fits within human society at large. Your business must serve a super-ordinate purpose beyond lining your wallet.